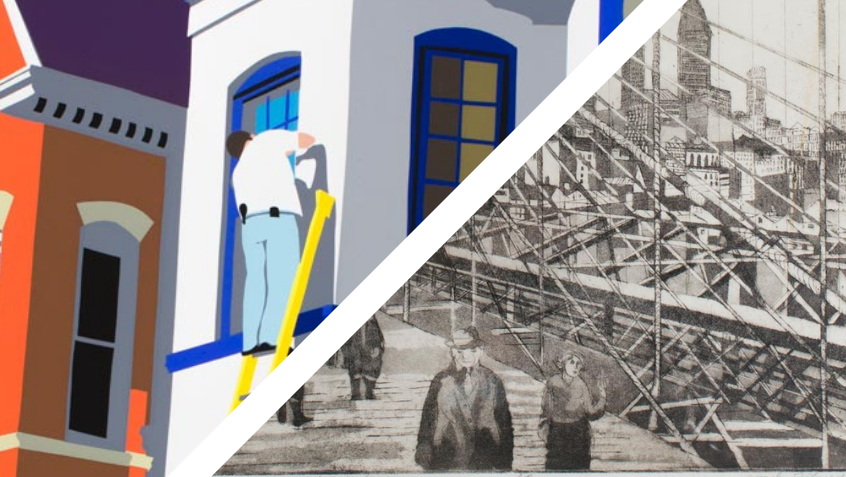 A DAY IN THE LIFE

Through the eyes of two different artists, this exhibition presents snapshots of America, both urban and pastoral , along with their inhabitants, as represented through two very different presentations of printmaking. As an example of how important an individual’s unique perspective is when shaping how and through what process an artist represents their subject matter, while these two artists both share an interest in the daily lives of people and make use of the medium of printmaking, their resulting prints yield wildly different results. The vibrant candy colors in Joseph Craig English’s serigraphs command the viewer’s attention and propel the eye around the print, investigating every nook and cranny, while Jack Bilander’s more muted sepia tones and rich black etchings set their scenes within a more reserved atmosphere that elicits an emotive response.

Jack Bilander, 1919-2008, was born in Poland and immigrated to the U.S. as a child. He studied art at the National Academy of Design, the Art Students League, Columbia University and New York University. His work has been exhibited at the Library of Congress, Brooklyn Museum of Art, and the National Academy of Design among others and can be found in the collections of the Metropolitan Museum of Art, the Library of Congress, the Brooklyn Museum, the Pennsylvania Academy of Fine Art (PAFA), the Wellington Museum, New Zealand, and many others around the world.

Joseph Craig English is an American artist predominantly known for his silkscreen prints focusing on streetscapes associated with the Greater Washington, DC area as well as cities such as Richmond, New York, North Carolina and California. He graduated from the School of the Arts at Virginia Commonwealth University before pursuing a career in advertising where he worked as a designer. By 1974 he resigned from the agency to work as a full time professional artist. His work can be found in the permanent collections of the Virginia Museum of Fine Arts, Chrysler Museum of Art, Fort Lauderdale Museum, and the Museum of Western Virginia. It is also included in the public collections of the City of Baltimore, DC Commission of the Arts, Georgetown University, IBM, Microsoft, U.S. State Department, Montgomery County, MD, The Washington Post, Xerox and others. He currently resides and works in the historic community of Washington Grove, Maryland.