“Each Season brings a world of enjoyment and interest in the watching of its unfolding; its gradual harmonious development, its culminating graces, and just as one begins to tire of it, it passes away and a radical change comes with new witcheries and new glories in its train.” – Mark Twain

The three pieces I am exhibiting which are monotypes were inspired by the above quote made by Mark Twain. Each of my monotypes describes a season of the year unfolding.

My greatest source of inspiration is my belief in the sublimity of art much as Twain uses his words to describe the sublimity of nature. My playful imagination linked with my strong love of nature is drawn from a personal visual menagerie where landscapes, portraits, still life and dreamlike places come to life. One of my artworks describes the spirit of Spring. Two bouquets of daffodils have a playful presence in an indoor setting. The artwork depicting Summer presents a sunMlower amidst dancing colors and Mlowers in a garden. Finally, Autumn is a depicted as a still life setting by an open window with a plate of eggplants. – Joan Jacobson Zamore

Ms Jacobson Zamore grew up in Bronx, NY and attended the High School of Music & Art . She earned her graduate and undergraduate degrees at Hunter College in New York City. She earned her MFA in Printmaking from Pratt Institute (1987) She resides in Milford Ct.

Her work is included in public collections such as Yale University, Colgate University, Eastern Connecticut State University, the Housatonic Museum of Art in Bridgeport, Ct, Aetna Corporation, She has contributed generously to the “ The Art Connection” a nationally subsidized agency in Boston Ma. which places art in public and private agencies. Among the public places to see her work are: Volunteer Young Lawyers Project(VLP) of Boston Bar Association Newton Housing Authority.

She is a member of the Printmakers Network of Southern New England. website (www.printmakersnetwork.org) 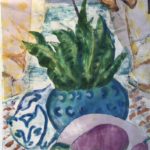 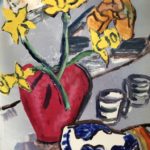 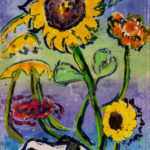